Having moved to Prince Albert about a year ago, I am just about getting to know the city. Not much of a big city guy and having lived in cities like Montreal, Toronto, and Ottawa to name some that I have lived in, along with my wife Aman and son Inesh, in the six years since we migrated to Canada you may call me a rolling stone / vagabond/ nomad (take your pick), but I guess it’s at Prince Albert that we may finally drop anchor. I know you might be thinking in the back of your minds “This guy seems crazy”, but if you would consider, that if I liked large crowds, congested roads, the concrete jungle, and all other issues that come along with it, why would I leave India in the first place?

The friendly people, fantastic outdoors and at the most a 15 minute commute to anywhere in the city seems to have gotten a hold of us. Unlike the big cities or even Saskatoon, we migrants are somewhat still a novelty here in Prince Albert and I really enjoy being a part of this discovery process. What amazed me most that being as large as it is Prince Albert did not have an Indian Restaurant, yes I know that some places do serve Indian dishes and yes they are almost authentic ……allow me to leave it that.

Being  technically educated for the Hospitality Industry I happen to be a Chef specializing in the fabled Indian Cuisine, which has converted me into what many of you may consider an overzealous Curry Crusader…. Yes you read it right….. A Curry Crusader…… You see I have taken it onto myself to dispel this westerner stereotype about Indian cuisine that it is hot, (as in spicy) and curry is all there is to it.

Everyone I have had a chance to speak on or about Indian food really seem to find it delicious but consider themselves exceptionally brave or adventurous to have partaken an East Indian dish because somehow it has been associated with being hot …. I guess because it is considered to be spicy, and the moment the words East Indian Food are mentioned the one thing that comes to everyone’s mind is “Curry Powder” and I believe that most people with little or no information about East Indian food think that if you were to sprinkle this magical curry powder onto anything that particular dish would very simply turn into a Curry, and that is all East Indian food is all about.

I would therefore like to take this opportunity to eradicate this stereotype, most of my Westerner and surprisingly even a few of my East Indian friends have about East Indian cuisine.

First off what I need to stress upon is that everyone associates East Indian food with a term called “CURRY”. Well! Ladies and gents sorry to break your notion or let me term it as a massive misconception, there is absolutely nothing called Curry in the entire cuisine. This term “curry” as we know it now-a- days is a generic term created and used by the Britishers who were in India for close to three centuries as a colonial power and absolutely fell in love with the food they discovered across the length and breadth of the Indian Sub-continent.

East Indian Cuisine like the sub-continent is vast and diverse and has evolved over the ages from cereal and pulse-based eating habits of the ancient inhabitants of the Harappa and Mohenjo-Daro civilizations on the banks of the Indus river to present-day Fusion Cuisine that has elements of the Mughal dynasties, Chinese cuisine and the European influence of the British and Portuguese colonization. Regional climate, as well as staple ingredients, also have a great influence over the food around that area, and with the population scale well over the one billionth mark, it would be an understatement to call the East Indian cuisine – Diverse.

It is very important, to completely understand the finesse that is associated with East Indian Cuisine we need to first off understand the difference between Spices and Seasonings and secondly get to know a bit of the geographical lay out of the entire sub-continent and then lastly and most importantly the cultural influences that were involved.

If we were to walk down the history lane, we would not very surprisingly realize that what actually brought European traders to the Indian Sub-Continent in first place was the spice trade, and that was precisely what prompted Columbus to go looking for a sea route across the Atlantic Ocean to India, and erroneously discovering the Americas. So undoubtedly spices have had a lot to do with shaping entire civilizations and have left an indelible mark in the history of mankind.

Another fact that should be very pertinent at this point would be the differences between the eastern and western eating habits. Whereas in this part of the world even though dishes are served with sides and accompaniments each of these dishes are actually eaten or consumed by themselves, while on the other hand with reference to eating habits in the Indian Sub-Continent meat or vegetable dishes in every meal are eaten along with rice or bread (roti as bread is called), and I am stressing along with and not separately. The accompanying rice or piece of bread actually mellows the comparative potency that the uninitiated may experience, therefore if you were to try any East Indian Dish all by itself and you were to compare it to anything that you have ever tasted, you would definitely get a slight kick comparatively speaking. So it is just a matter of adjusting or training yourself to what you aspire to experience.

Ok now back to my Curry Crusade and like I mentioned earlier I would like to take this opportunity to educate you to the Geographical Layout of the Indian Subcontinent. I have used the term Sub- Continent quite a few times in this write up, I guess it will be right to elaborate upon this right now. India as it is now, was created in 1947 when India gained independence from the British colonization. The Britishers left after a bloody partition which carved out Pakistan and Bangladesh from India both of which were areas with a majority of Muslim population, ironically even in present times India has more Muslims living in India than in both these countries. Therefore the region comprising of India, Pakistan, Srilanka, Bangladesh, Burma, Bhutan and Nepal is generally termed as the Indian Subcontinent, all of these countries have a similar cultural background and therefore the eating habits also are quiet similar, which have quite naturally influenced the East Indian Cuisine.

Having said this I will in the same breath mention that, this by no means implies that there is one universal cuisine in the entire sub-continent. Geographically speaking the sub-continent has every type of feature with snowcapped Himalaya Mountains in the north to arid equatorial deserts, tropical rain forests, and sea coasts as well a rolling plains and, each of these areas naturally have diverse climates which results in an equally diverse variety of edible products available for people to consume. To explain this further if were to compare the cuisine, from Kashmir in the very north (where I was born), to the cuisine in the southernmost tip which is the coastal province of Kerala, though the staple grain consumed predominately is rice the two areas have completely different cooking styles.

Just so you don’t have to go looking for your version of the world atlas or google maps I have added a handy map just for you to get a picture of what I have been writing about and kind of generally get better acquainted with the region. 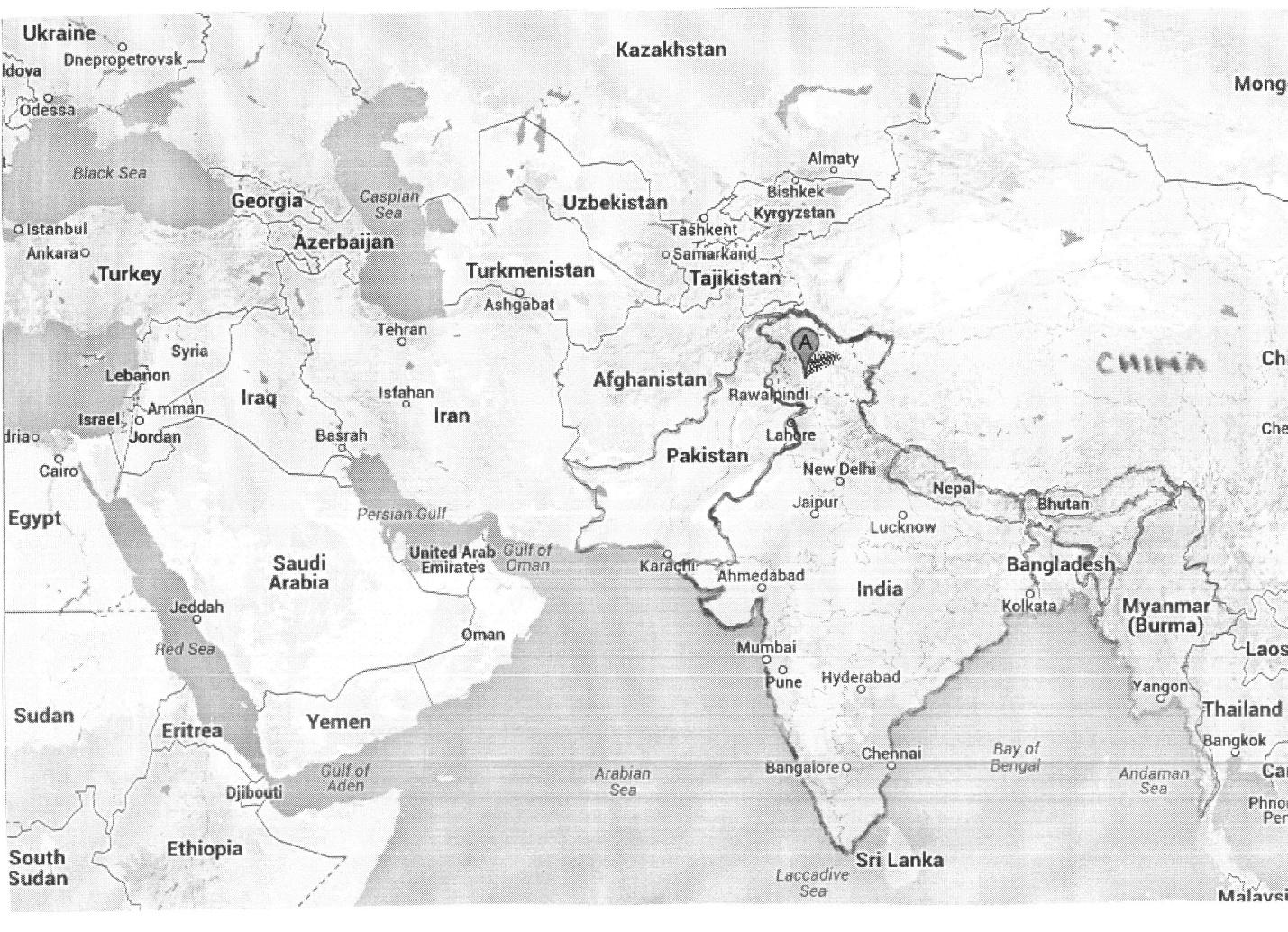 The Kashmiri cuisine has a very strong influence from the Mughal dynasty who came to India from the Middle Eastern regions bringing with them the use of dried fruits, heavy use of spices thick creamy gravies based on use of onions, ginger garlic and shallots, along with lots of dried vegetables to cover the cold winter months when greens are not so readily available, and a lot of use of meat like poultry, goat meat and lamb.

Pork is not consumed by Muslims whereas beef if not legally available in India since cows are considered holy by the Hindus, so there you are as far as the choice of meats available is somewhat limited but that by no means , means that pork and beef cannot be cooked in the East Indian style. You would understand what I mean to point out here is that even if you were able procure pork or beef (which would not be impossible) in India and unless it is imported, like it is, for use in Hotels etc. the quality of the meat you would get would be inedible since pork and beef are not raised for food, you would probably get- say – beef from a cow that is useless after being in a dairy farm and does not produce milk anymore.

The South Indian cuisine on the other hand is predominantly very light on use of spices, but that does not mean it cannot be a fiery hot dish, with lots of use of coconut and coconut water, light runny gravies and obviously use of a variety of seafood, fresh greens, steamed food or lightly sautéed retaining natural flavors and predominantly vegetarian, quite the opposite of the eating habits up north in Kashmir.

There you go!!! I am sure I have you quiet thoroughly confused but on the other hand so very curious to explore the realm of East Indian food, which I will try and reveal to you over a  series of write-ups to carry on what I call my Curry Crusade,