Having written about Green Cardamom in my previous column I now start off with the Black or Brown Cardamom… and strangely I feel so Canadian, you see the story about green cardamoms and the black cardamoms is exactly like that of us Canadians and our friends south of the border. Many people don’t even know that these are two different entities one much stronger, bolder, bigger, stabler and adaptable and the other…well let’s say…… just better known.

There you go!! I said it Eh!! And will elaborate – There are Americans I know and have personally met, for whom Canada is just another state up north. There are others who start to ask about the people from Canada they had met last winter on their Mexican Vacation expecting me to know them and the list goes on ….. Where I am getting at with this is, that Black Cardamoms are much underrated and I am sure many of you reading this would not even know the difference between the two.

Black / Brown Cardamom, (here on forward I will just use Black Cardamom) like their Green Cousins are also originate in the Indian Subcontinent but further North in the Himalayan Mountain ranges from areas in Bhutan , Nepal and in the Northern regions of the State if Sikkim in India. 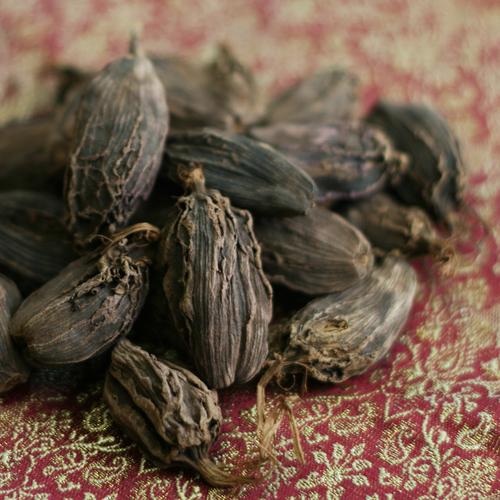 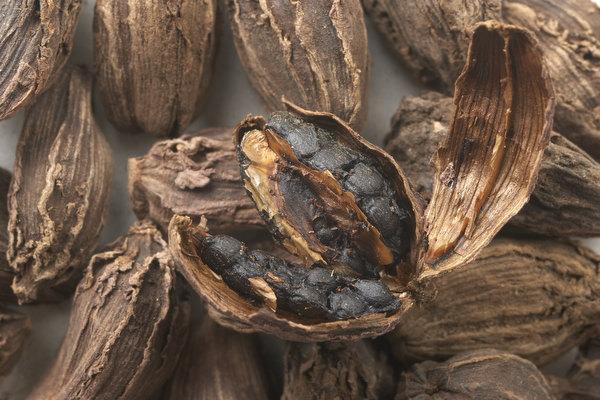 The plants are Similar but much taller between 6 to 7 feet tall and the pods are Harvested from near the base by hand, to avoid machines damaging the plants or/ and the pods, and that is one of the reasons these are so expensive. I have had the privilege of visiting one of these plantations in Northern Sikkim along with my Father a Colonel in the Indian Army who was deployed there, and actually seeing all this first hand.

The freshly harvested pods are spread out to dry for about a week on  drying platforms which are raised a couple of feet above slow smoldering fires to quicken the drying process and imparting a distinct smoky character.

Black Cardamoms were very incorrectly also called Bastard Cardamoms since the seeds of these were used to substitute green cardamom seeds and powder in earlier times of spice trade in Europe, and I think it was a deliberate strategy to keep the difference between the two very vague to cash in on their dearth and substitute one for the other.

But in reality both are although similar but the black cardamoms are much bigger in size and much stronger in aroma and in general have a stronger presence wherever these are used, so if in your wildest thoughts you have had a notion that black cardamoms are just an inferior version of green cardamoms, go to the nearest window and fling this notion as far as you possibly can.

You see while green cardamoms are indispensable for baking, they tend to be weak for stews, barbeques, stir-fries, etc. the real food part of cooking and this is where I suggest you experiment with black cardamoms.

The next time you are patting some burgers add in some freshly ground black cardamom powder, in addition to the other fillers in your family recipe or when you are making meat balls out of ground beef just tuck in a couple of seeds into their core you and your family will be blown away with the difference these subtle changes will make to adding that WOW factor to your food. Try adding fresh ground powder to your barbeque rub I promise you will be grateful to me for letting you into this culinary secret.

Ah yes whenever you boil meat ground or otherwise just throw in a couple of pods of black cardamom and that will significantly cut that odor that boiled meat usually has and if you haven’t got the hint yet the next time you make any meat based soup …. Voila!!! And goes without saying next time you make chili you know adding what can make it awesome.

And yes amongst several other health benefits black cardamoms are regarded strong anti-flatulent, therefore their use will also have a benefit countering the obnoxious after effects of eating bean laden chili….

To finish off this write up I will add a word of caution, whenever you add whole crushed pods of this much underrated wonder spice you need to keep in mind that after simmering the pods have an uncanny appearance to be mistaken flies or even cockroaches in cooked dishes, remember to spoon these out before you serve your dish, I know of Chefs who actually count the number of pods they add into their dish and make it a point to retrieve the exact number when they are done cooking. All said and done …. Go ahead and experiment with this wonder spice ……..

For any suggestions or queries Please get in touch with me on my email : harinderrai@gmail.com and follow me on Twitter : @currycrusade